If you haven’t made plans to attend either of our Mission to Mars events on October 11, 2014, you’ll be missing out on an amazing opportunity to learn more about our space program, and all of the work and exploration we’ve been doing on the planet of Mars.

We’ve talked about how beneficial these types of programs are for kids, and to show you, we invite you to bring the entire family out for our Mission to Mars Family Fun Day. This part of our event kicks off at 10:00am this Saturday morning. All kids are invited to come wearing the best costumes, because we’ll be having a costume contest. There are also many other activities for kids to enjoy. They can get their faces painted, they’ll be able to meet a few Martians (and maybe even ask all those burning questions about Mars they’ve been dying to ask), and we’ll also have a scavenger hunt in the museum. This is definitely an event unlike any other, and your kids will have a blast.

They won’t even realize they’re learning!

After you have lunch at Sweet-n-Saucy, here in our Wings Cafe, you’ll want to finish up the fun and head home to prepare for the evening’s Gala (adults only). Joe Cavallaro and his Dixieland Jazz Band will be providing the music for the event, and there will be beer and wine tasting from local vendors. Sweet-n-Saucy has cooked up a delicious meal for the evening, and Shoshanna Cole from Cornell University will be on hand to discuss our last 10 Years on Mars.

This is such an important event for the Wings of Eagles Discovery Center, but it’s also important for the kids in our region. We love being able to provide them with STEM educational programs, and your support will help to keep those programs going.

We hope you’ll join us for an incredible weekend as we do our part to explore Mars and support STEM youth education in the Big Flats, Corning, Elmira and Horseheads area.

To make your reservations for our Gala, please click here. We’ll see you tomorrow!

Everyone loves a good comedian, and Louis C.K. is one of the hottest ones going right now. Yesterday, he went on a Twitter rant about Mars, and there’s actually quite a bit of truth in what he was saying. Actually, that’s what makes comedy funny, right? Still, let’s take a closer look at what he had to say in reference to what we know about the red planet today.

“It really feels like Mars used to be a here that got globally warmed by some very us-y people-things.”

“What was left turned into here and our moon…and later we’ll use our moon to go back.”

While scientists don’t really know very much about Mars prior to 1970, they do know that there’s evidence that Mars once had water. In 1996, NASA geologist David McKay took a closer look at a Martian meteorite that landed on Earth. Along with his researchers, McKay discovered what looked to be fossilized microbes. Could it be a sign that Mars once had some form of life? That debate is ongoing, and right now scientists believe we don’t have enough evidence to support the theory. Still…

NASA’s Curiosity is still roaming the planet of Mars, looking for any tell-tale signs of ancient life on the surface.

What about the “us-y people things” Louis referred to? Could it be possible that life on earth actually originated from Mars? That’s a pretty far-reaching theory, but it’s not one that isn’t in the backs of the minds of certain scientists. In fact, a biochemist by the name of Steven Brenner has stated that an element named molybdenum wasn’t present in its life-constructing form when life first appeared on Earth, billions of years ago. However, it was present on Mars. He said, “It’s only when molybdenum becomes highly oxidized that it is able to influence how early life formed,” he said in a statement at the time. “This form of molybdenum couldn’t have been available on Earth at the time life first began, because 3 billion years ago, the surface of the Earth had very little oxygen, but Mars did.”

Louis C.K.’s rant was worth a chuckle for sure, and he touched on some things that have a real basis in modern-day science. But what’s the truth behind it all?

If you’re curious, you’ll want to join us this Saturday October 11, 2014. We’re going to dive deep into what we know about Mars at our Mission to Mars Gala in the evening. In the morning, we’ll host an event for kids that will include lots of fun events, and spark their curiosity about what our Mars rover is doing on the red planet right now!

Click here to make your reservations for our Gala, and make sure you bring the family out for Mission to Mars in the morning. This is going to be a great weekend at the Wings of Eagles Discovery Center. Make sure you don’t miss out!

Is Your Child Struggling in School? We’d Like to Help…

When the school year started, you had high hopes for your son or daughter. Surely, after a summer spent relaxing and having fun, your child would be more than ready to hit the books come September. Right?

Unfortunately, it doesn’t always work out that way. Kids can easily get frustrated in school, especially when they’re not given the hands-on tools they need to become interested in what they’re learning. The good news is that Sweet-n-Saucy, in partnership with the Wings of Eagles Discovery Center in Big Flats, NY wants to help. We’d like to invite you and your family to join us this coming Saturday for a Mission to Mars.

The festivities will kick off on Saturday morning at 10am right here at the Wings of Eagles Discovery Center. We have plenty of fun activities planned for your kids, including a scavenger hunt, our flight simulator and a costume contest. Around noon, feel free to take a break and visit Sweet-n-Saucy in our Wings Cafe for lunch. After you’ve had your fill, you can get right back to the fun.

In the evening, we’re hosting a Mission to Mars Gala (adults only) featuring some terrific live music, beer and wine tasting and a delicious meal. The proceeds from this fantastic weekend will help to support STEM youth educational programs for the kids in our region.

These STEM programs are hands-on activities that really get kids involved in science, technology, engineering and math. Once kids become involved in STEM programs, they often form a love for these subjects, and many of them go on to pursue a career in one of these fields.

Perhaps your child is struggling in school right now, but that doesn’t have to continue for the entire school year. STEM youth education programs are a great way to hit the “reset” button as far as how your child feels about school. It all starts with a Mission to Mars on Saturday, October 11, 2014.

Won’t you join us? 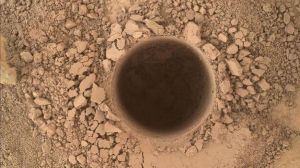 The Martian rover Curiosity was launched in November of 2011, and its mission was to study the planet of Mars. Since its arrival on the red planet, it’s helped scientists learn a great deal about the Martian atmosphere, and this information has been invaluable.

On September 24, 2014, Curiosity finally began drilling into the base of Mount Sharp, which is what researchers have been waiting for. It drilled a 2.6 inch hole into the crust and began gathering samples of the powdered rock, which were then analyzed. Eventually, Curiosity will move up the mountain, which is almost three and a half miles high. The rover will drill and analyze the rock along the way, providing us with even more clues about how the mountain was formed.

That’s where you come in.

Sweet-n-Saucy in Big Flats, NY is proud to be a part of the events hosted by the Wings of Eagles Discovery Center, and we have an important one coming up that you won’t want to miss. On October 11, 2014, they will be hosting Mission to Mars, which features fun activities for the kids during the day and a lovely Gala event in the evening. The proceeds from ticket sales will go to help fund additional STEM youth education programs right here at the Wings of Eagles Discovery Center.

NASA’s work on Mars is so important, and we want you to be a part of it. We hope you’ll join us on October 11 for both of these amazing events! For more information, please contact us! To register, please click here.

Can you imagine what it would be like to drive a car on the planet Mars? With 38% less gravity than we have on Earth, it’s sure to be a challenge.

One teacher in the State of Washington had an idea to commission her students to come up with a Mars Driver’s License, and they rose to challenge. You can read all about it by clicking here, but we’ll give you the details.

First, the class talked about what life would be like on Mars, and how one would go about driving a vehicle on such treacherous terrain. They studied the current driver’s license for the State of Washington, and they took the various components from that license in order to design their own Mars license.

Of course, they had to take the project even further by contacting Mike Lowry, Washington’s governor. They wanted to know if he would be willing to sign their license, and his answer was an emphatic “Yes!” The class was thrilled, and the project grew even more. They ended up having a school-wide assembly where they performed a reenactment of what it would really be like to drive on Mars.

Once the license was completed, the students were so proud of the work they had done. Some high-ranking state officials had taken notice of their project, and to top it off, their driver’s license became the only piece of student artwork to have a prominent place in the Smithsonian Institution’s National Air and Space Museum.

This is an excellent example of what kids can accomplish when they are given the opportunity to dream big. On October 11, 2014, you will have an opportunity to do your part to promote STEM youth educational programs here at the Wings of Eagles Discovery Center. Whether you bring your family out to our Mission to Mars Family Fun Day, or you return in the evening to attend our Gala, not only will you have a wonderful time, but you will become an important part of furthering the educational opportunities presented to our youth.

We hope you will join us! Please click here to register today!